1
Which OSPF component is identical in all routers in an OSPF area after convergence?

When converged, all routers in an area have identical topology tables.*
Its contents are the result of running the SPF algorithm.
After convergence, the table only contains the lowest cost route entries for all known networks.
It is a link-state database that represents the network topology.*
The topology table contains feasible successor routes.
The table can be viewed via the show ip ospf database command.*

3
A router is participating in an OPSFv2 domain. What will always happen if the dead interval expires before the router receives a hello packet from an adjacent DROTHER OPSF router?

SPF will run and determine which neighbor router is “down”.
OSPF will run a new DR/BDR election.
OSPF will remove that neighbor from the router link-state database.*
A new dead interval timer of 4 times the hello interval will start.

4
Which command will provide information specific to OSPFv3 routes in the routing table?

6
A network administrator enters the command ipv6 router ospf 64 in global configuration mode. What is the result of this command?

7
Fill in the blank.
The election of a DR and a BDR takes place on    ” multiaccess ”     networks, such as Ethernet networks.

9
Which command should be used to check the OSPF process ID, the router ID, networks the router is advertising, the neighbors the router is receiving updates from, and the default administrative distance?

Launch PT  –  Hide and Save PT
Open the PT Activity. Perform the tasks in the activity instructions and then complete the task.

What message is displayed on www.ciscoville.com?

12
Fill in the blank. Do not use abbreviations.
To quickly verify OSPFv3 configuration information including the OSPF process ID, the router ID, and the interfaces enabled for OSPFv3, you need to issue the command    ” show ipv6 protocols ”

13. By order of precedence, match the selection of router ID for an OSFP-enabled router to the possible router ID options. (Not all options are used.)

14. Match the description to the term. (Not all options are used.)

This is where the details of the neighboring routers can be found. -> adjacency database
This is the algorithm used by OSPF.  -> Shortest Path First
All the routers are in the backbone area.  -> Single-area OSPF
– not scored –
This is where you can find the topology table.  -> link-state database
– not scored –

15
Which three statements describe the similarities between OSPFv2 and OSPFv3? (Choose three.)

16
What is a function of OSPF hello packets?

18
What are the two purposes of an OSPF router ID? (Choose two.)

19
Which command will verify that a router that is running OSPFv3 has formed an adjacency with other routers in its OSPF area?

20
Single area OSPFv3 has been enabled on a router via the ipv6 router ospf 20 command. Which command will enable this OSPFv3 process on an interface of that router?

22
Which criterion is preferred by the router to choose a router ID?

23
Which OPSF packet contains the different types of link-state advertisements?

24
What does a Cisco router use automatically to create link-local addresses on serial interfaces when OSPFv3 is implemented?

25. A router is participating in an OSPFv2 domain. What will always happen if the dead interval expires before the router receives a hello packet from an adjacent DROTHER OSPF router?

OSPF will run a new DR/BDR election.
SPF will run and determine which neighbor router is “down”.
A new dead interval timer of 4 times the hello interval will start.
OSPF will remove that neighbor from the router link-state database.*

26. What is the first criterion used by OSPF routers to elect a DR?

29. What are two reasons that will prevent routers from forming an OSPFv2 adjacency? (Choose two.)
mismatched subnet masks on the link interfaces ***
use of private IP addresses on the link interfaces
one router connecting to a FastEthernet port on the switch and the other connecting to a GigabitEthernet port
a mismatched Cisco IOS version that is used
mismatched OSPF Hello or Dead timers ***

30. What command would be issued to determine if a routing protocol-initiated relationship has been made with an adjacent router?
show ip protocols
ping
show ip interface brief
show ip ospf neighbor *** 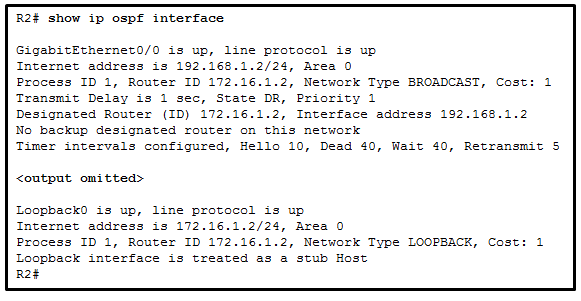 Refer to the exhibit. A network administrator issued the command show ip ospf interface on the router R2. What conclusion can be drawn?
R2 has not formed an adjacency with any other router ***
R2 is connecting to a point-to-point network
R2 is configured with the OSPF router-id command
R2 is not configured with default Hello and Dead timer values

33. What command would be used to determine if a routing protocol-initiated relationship had been made with an adjacent router?

34. What are two reasons that will prevent two routers from forming an OSPFv2 adjacency? (Choose two.)

a mismatched Cisco IOS version that is used

use of private IP addresses on the link interfaces

35. Match the OSPF state with the order in which it occurs. (Not all options are used.)