2. What is one of the drawbacks to using transparent mode operation on an ASA device?

no support for IP addressing

no support for management

no support for using an ASA as a Layer 2 switch

no support for QoS*

3. What is a characteristic of ASA security levels?

Each operational interface must have a name and be assigned a security level from 0 to 200.

The lower the security level on an interface, the more trusted the interface. 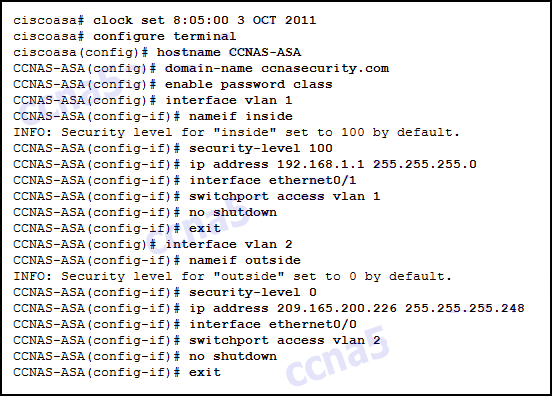 Because the ASA 5505 does not support the configuration of a third interface, the administrator cannot configure the third VLAN.

The administrator must enter the no forward interface vlan command before the nameif command on the third interface.*

The administrator configures the third VLAN interface the same way the other two were configured, because the Base license supports the proposed action.

The administrator needs to acquire the Security Plus license, because the Base license does not support the proposed action.

5. What command defines a DHCP pool that uses the maximum number of DHCP client addresses available on an ASA 5505 that is using the Base license?

They are the most common type of ACL.

They are applied to interfaces to control traffic.

They are typically only used for OSPF routes.*

They specify both the source and destination MAC address.

They identify only the destination IP address.*

The ASA allows inbound traffic initiated on the Internet to the DMZ, but not to the Inside interface.

The ASA console will display an error message.

The ASA will not allow traffic in either direction between the Inside interface and the DMZ.*

The ASA allows traffic from the Inside to the DMZ, but blocks traffic initiated on the DMZ to the Inside interface.

9. What is a difference between ASA IPv4 ACLs and IOS IPv4 ACLs?

ASA ACLs do not have an implicit deny any at the end, whereas IOS ACLs do.

ASA ACLs use forward and drop ACEs, whereas IOS ACLs use permit and deny ACEs.

10. What is the purpose of the webtype ACLs in an ASA?

to restrict traffic that is destined to an ASDM

11. Refer to the exhibit. A network administrator has configured NAT on an ASA device. What type of NAT is used?

12. Refer to the exhibit. A network administrator is configuring an object group on an ASA device. Which configuration keyword should be used after the object group name SERVICE1?

13. When dynamic NAT on an ASA is being configured, what two parameters must be specified by network objects? (Choose two.)

a range of private addresses that will be translated*

the pool of public global addresses*

the inside NAT interface

the outside NAT interface

14. What function is performed by the class maps configuration object in the Cisco modular policy framework?

restricting traffic through an interface

Traffic from the Internet and DMZ can access the LAN.

Traffic from the Internet and LAN can access the DMZ.

Traffic from the Internet can access both the DMZ and the LAN.

Traffic from the LAN and DMZ can access the Internet.*

16. What are three characteristics of the ASA routed mode? (Choose three.)

This mode is referred to as a “bump in the wire.”

In this mode, the ASA is invisible to an attacker.

The interfaces of the ASA separate Layer 3 networks and require different IP addresses in different subnets.*

It is the traditional firewall deployment mode.*

This mode does not support VPNs, QoS, or DHCP Relay.

NAT can be implemented between connected networks.*

17. Refer to the exhibit. An administrator has configured an ASA 5505 as indicated but is still unable to ping the inside interface from an inside host. What is the cause of this problem? 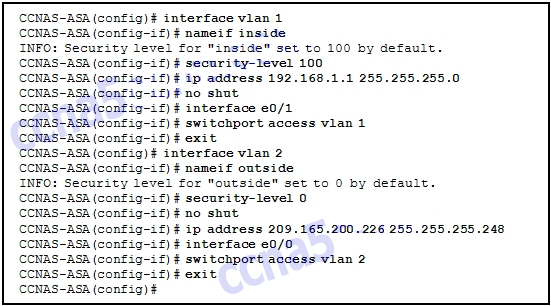 The no shutdown command should be entered on interface Ethernet 0/1.*

VLAN 1 should be assigned to interface Ethernet 0/0 and VLAN 2 to Ethernet 0/1.

An IP address should be configured on the Ethernet 0/0 and 0/1 interfaces.

18. Refer to the exhibit. According to the command output, which three statements are true about the DHCP options entered on the ASA 5505? (Choose three.)

The dhcpd address [start-of-pool]-[end-of-pool] inside command was issued to enable the DHCP client.

The dhcpd auto-config outside command was issued to enable the DHCP server.

The dhcpd address [start-of-pool]-[end-of-pool] inside command was issued to enable the DHCP server.*

The dhcpd auto-config outside command was issued to enable the DHCP client.*

The dhcpd enable inside command was issued to enable the DHCP client.

The dhcpd enable inside command was issued to enable the DHCP server.*

19. Refer to the exhibit. What will be displayed in the output of the show running-config objectcommand after the exhibited configuration commands are entered on an ASA 5505?

20. What must be configured on a Cisco ASA device to support local authentication?

the IP address of the RADIUS or TACACS+ server

ASA uses the ? command whereas a router uses the help command to receive help on a brief description and the syntax of a command.

To use a show command in a general configuration mode, ASA can use the command directly whereas a router will need to enter the do command before issuing the show command.*

To complete a partially typed command, ASA uses the Ctrl+Tab key combination whereas a router uses the Tab key.

To indicate the CLI EXEC mode, ASA uses the % symbol whereas a router uses the # symbol.

22. What are two factory default configurations on an ASA 5505? (Choose two.)

VLAN 2 is configured with the name inside.

The internal web server is disabled.

DHCP service is enabled for internal hosts to obtain an IP address and a default gateway from the upstream device.

PAT is configured to allow internal hosts to access remote networks through an Ethernet interface.*

24. Which statement describes a feature of AAA in an ASA device?

Accounting can be used alone.*

Authorization is enabled by default.

If authorization is disabled, all authenticated users will have a very limited access to the commands.

Both authorization and accounting require a user to be authenticated first.

25. A network administrator is working on the implementation of the Cisco Modular Policy Framework on an ASA device. The administrator issues a clear service-policy command. What is the effect after this command is entered?

All class map configurations are removed.

All service policies are removed.

26. What is needed to allow specific traffic that is sourced on the outside network of an ASA firewall to reach an internal network?