1. Which statement describes the port speed LED on the Cisco Catalyst 2960 switch?

If the LED is off, the port is not operating.

If the LED is blinking green, the port is operating at 10 Mb/s.

2. Which command is used to set the BOOT environment variable that defines where to find the IOS image file on a switch?

3. What is a function of the switch boot loader?

to speed up the boot process

4. Which interface is the default location that would contain the IP address used to manage a 24-port Ethernet switch?

interface connected to the default gateway

5. A production switch is reloaded and finishes with a Switch> prompt. What two facts can be determined? (Choose two.)

The boot process was interrupted.

There is not enough RAM or flash on this router.

A full version of the Cisco IOS was located and loaded.*

The switch did not locate the Cisco IOS in flash, so it defaulted to ROM.

Latency is reduced because the NIC processes frames faster.

Performance is improved because the NIC is able to detect collisions.

7. In which situation would a technician use the show interfaces switch command?

when packets are being dropped from a particular directly attached host*

when an end device can reach local devices, but not remote devices

8. Refer to the exhibit. A network technician is troubleshooting connectivity issues in an Ethernet network with the command show interfaces fastEthernet 0/0. What conclusion can be drawn based on the partial output in the exhibit? 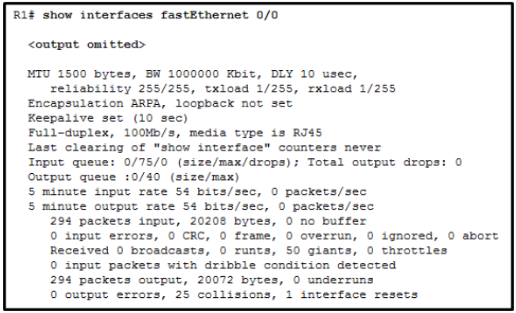 All hosts on this network communicate in full-duplex mode.

Some workstations might use an incorrect cabling type to connect to the network.

There are collisions in the network that cause frames to occur that are less than 64 bytes in length.

A malfunctioning NIC can cause frames to be transmitted that are longer than the allowed maximum length.*

9. Refer to the exhibit. What media issue might exist on the link connected to Fa0/1 based on the show interface command? 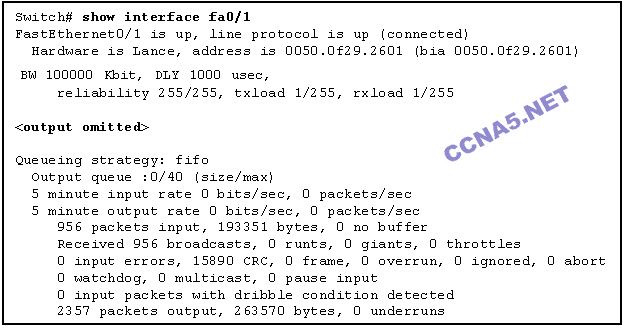 The bandwidth parameter on the interface might be too high.

There could be an issue with a faulty NIC.

There could be too much electrical interference and noise on the link.*

The cable attaching the host to port Fa0/1 might be too long.

on both ends of the connection

on the full-duplex end of the connection

only on serial interfaces

on the half-duplex end of the connection*

11. What is one difference between using Telnet or SSH to connect to a network device for management purposes?

Configure SSH on a different line.

13. What is the effect of using the switchport port-security command?

enables port security on an interface*

automatically shuts an interface down if applied to a trunk port

14. Where are dynamically learned MAC addresses stored when sticky learning is enabled with the switchport port-security mac-address sticky command?

15. A network administrator configures the port security feature on a switch. The security policy specifies that each access port should allow up to two MAC addresses. When the maximum number of MAC addresses is reached, a frame with the unknown source MAC address is dropped and a notification is sent to the syslog server. Which security violation mode should be configured for each access port?

The three configurable violation modes all log violations via SNMP.

After entering the sticky parameter, only MAC addresses subsequently learned are converted to secure MAC addresses.

17. Which action will bring an error-disabled switch port back to an operational state?

Remove and reconfigure port security on the interface.

Issue the switchport mode access command on the interface.

Clear the MAC address table on the switch.

Issue the shutdown and then no shutdown interface commands.*

18. Refer to the exhibit. Port Fa0/2 has already been configured appropriately. The IP phone and PC work properly. Which switch configuration would be most appropriate for port Fa0/2 if the network administrator has the following goals? 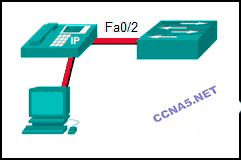 No one is allowed to disconnect the IP phone or the PC and connect some other wired device.
If a different device is connected, port Fa0/2 is shut down.
The switch should automatically detect the MAC address of the IP phone and the PC and add those addresses to the running configuration.

19. Refer to the exhibit. What can be determined about port security from the information that is shown? 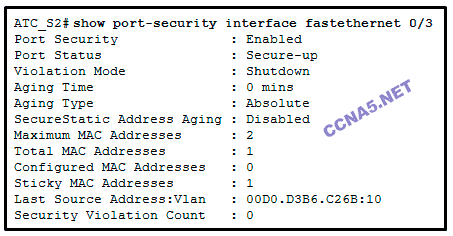 The port has been shut down.

The port has two attached devices.

The port violation mode is the default for any port that has port security enabled.*

The port has the maximum number of MAC addresses that is supported by a Layer 2 switch port which is configured for port security.

20. Refer to the exhibit. Which event will take place if there is a port security violation on switch S1 interface Fa0/1?

A notification is sent.

Packets with unknown source addresses will be dropped.*

The interface will go into error-disabled state.

21. Open the PT Activity. Perform the tasks in the activity instructions and then answer the question. 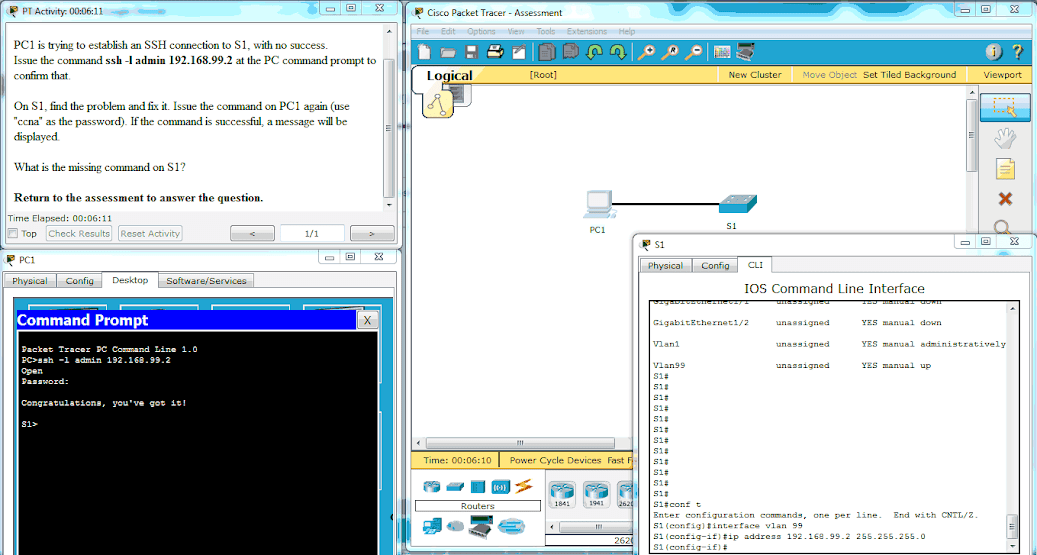 22. Match the step to each switch boot sequence description. (Not all options are used.)

23. Identify the steps needed to configure a switch for SSH. The answer order does not matter. (Not all options are used.)

Place the options in the following order:
[+] Create a local user.
[+] Generate RSA keys.
[+] Configure a domain name.
[+] Use the login local command.
[+] Use the transport input ssh command.
[+] Order does not matter within this group.

24. Match the link state to the interface and protocol status. (Not all options are used.)