2. What is the outcome of a Layer 2 broadcast storm?

Routers will take over the forwarding of frames as switches become congested.
New traffic is discarded by the switch because it is unable to be processed.*
CSMA/CD will cause each host to continue transmitting frames.
ARP broadcast requests are returned to the transmitting host.

3. What is the purpose of the Spanning Tree Protocol (STP)?

4. What is a characteristic of a Layer 2 loop?

5. What additional information is contained in the 12-bit extended system ID of a BPDU?

6. Which three components are combined to form a bridge ID?

7. Refer to the exhibit. 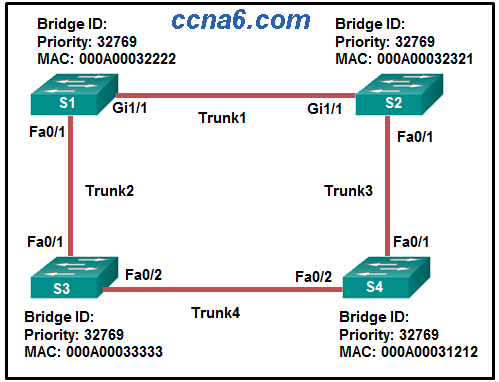 Which trunk link will not forward any traffic after the root bridge election process is complete?

9. Which protocol provides up to 16 instances of RSTP, combines many VLANs with the same physical and logical topology into a common RSTP instance, and provides support for PortFast, BPDU guard, BPDU filter, root guard, and loop guard?

10. Which Cisco switch feature ensures that configured switch edge ports do not cause Layer 2 loops if a port is mistakenly connected to another switch?

11. Which two types of spanning tree protocols can cause suboptimal traffic flows because they assume only one spanning-tree instance for the entire bridged network? (Choose two.)

12. Which spanning tree standard supports only one root bridge so that traffic from all VLANs flows over the same path?

14. In which two port states does a switch learn MAC addresses and process BPDUs in a PVST network? (Choose two.)

15. If no bridge priority is configured in PVST, which criteria is considered when electing the root bridge?

16. Which RSTP ports are connected to end devices?

17. A network administrator is preparing the implementation of Rapid PVST+ on a production network. How are the Rapid PVST+ link types determined on the switch interfaces?

18. Which port state will switch ports immediately transition to when configured for PortFast?

19. Which STP priority configuration would ensure that a switch would always be the root switch?

What is the role of the SW3 switch?

21. To obtain an overview of the spanning tree status of a switched network, a network engineer issues the show spanning-tree command on a switch. Which two items of information will this command display? (Choose two.)

The root bridge BID.*
The role of the ports in all VLANs.*
The status of native VLAN ports.
The number of broadcasts received on each root port.
The IP address of the management VLAN interface.

22. What port type is used to interconnect switches in a switch stack?

23. Match the spanning-tree feature with the protocol type. (Not all options are used.)

24. Fill in the blank. Do not use abbreviations.

25. Open the PT Activity. Perform the tasks in the activity instructions and then answer the question.
Which switch is the root bridge?​